Teaching regrouping can be difficult, but it’s not that bad if you have planned activities that are fun and exciting. In this article, we will talk about five interesting hands-on activities to teach the concept of regrouping in the best way possible.

But before you get started, make sure your children know how to add and subtract. If you’re teaching preschoolers, refer how to teach addition and subtraction to preschoolers.

Hands-on activities work best for children. Grab a box of 100 small cubes or beads and you’re all set to get started with this activity.

Start with the addition of one digit numbers for the children to get a hang of the activity. For example, to add 3 and 9, make two groups of beads such that a group of 3 and a group of 9 are kept separately. Now, ask the child to count how many “tens” are there in both groups together. In this case, the group of 9 beads and one bead from the other group make a ten. So write 1 in the tens column. Now count the rest of the beads (1 + 1) and write the number in the ones column. So 1 in the tenth place and 2 in the ones place makes it 12 (9 + 3 = 12)

Adding two digit numbers can be a challenge with beads but if your child likes this activity, it is all good as long as you have a large number of beads. Here are two other ways in which you can do this activity: 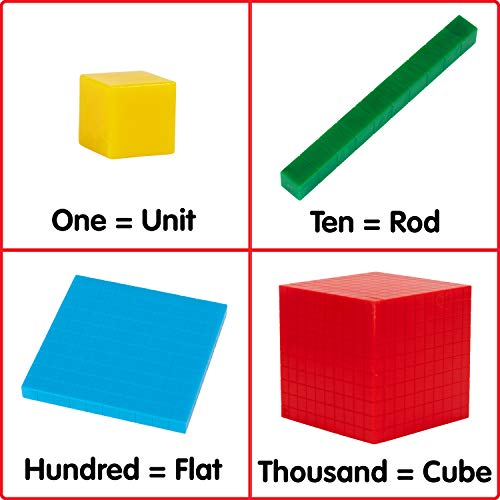 Another version of this activity is to use base-ten blocks and many single blocks. Base-ten blocks are available in the markets and is a great way to teach regrouping while keeping the activities still hands-on.

This is a great activity for kids who are interested in drawing or simply scribbling with pencils and colored pens.

The task is to circle groups of ten and count the number of tens. For example, to add 9 and 15, the child has to draw 9 small circles in a group and 15 in another group. Now, he has to group 10 circles together in order to count the number of tens. Here, he has to circle around the group having 9 circles and extend the line to include one more circle from the other group — this makes it one group of ten. Now he has to search if there are more groups of ten. As the group of 15 still has 14 circles left, he can draw a line around 10 circles in that group — making this the second group of ten. Now count the remaining circles. There are four circles remaining, which means that there aren’t any more 10s to regroup. So it is time to write the number of tens and ones. There are two tens and four ones. Therefore, the answer is 24.

This is an excellent activity to introduce the concept of regrouping. Although it may take some time to finish a problem, the kids will be able to fully understand how regrouping in math works. Also, writing activates parts of the brain!

Use arrows to expand the tens and ones, so that it will be easier for the kids to understand. You can also use different colored pens for tens and ones.

Similar to “regrouping using expanded notation”, split subtraction is another strategy to teach the concept of regrouping in subtraction problems.

This method also involves expanding the tens and ones. Let’s take 52 – 25 as an example. Here, expand 52 as 50 + 2 and 25 as 20 + 5. This is how you regroup the numbers (making groups of tens). Now write the expanded forms in subtraction format. You can revisit the concept of borrowing in this example. Number 7 should come in the ones place and in the tens place 40 – 20 will become 20. Now your child can add the two numbers (20 + 7) and find out the correct answer (27).

Using the Standard Algorithm for Regrouping

Standard algorithm involves treating each place value column separately. Line up the numbers vertically and split up the different place values. If solving problems involves borrowing or carrying over, show the kids how it works by drawing arrows from one place to another.

Preschoolers may find this method difficult to understand, so make sure you work on simple hands-on activities first and introduce this one only after they fully understand the concept of regrouping.

What is regrouping in math?

Regrouping in math is the process of rearranging numbers into groups of tens and ones. This is mainly done to carry out mathematical operations like addition and subtraction.

Can you explain regrouping to preschoolers?

Preschoolers can be taught the concept of regrouping if they understand terms like “tens” and “ones”. Use simple hands-on activities to introduce the concept and then move on to more abstract tasks.

How can you make teaching math more interesting?

To make teaching math more interesting, include activities that are both fun and exciting for the kids. For instance, spinwheels with different math problems written in each section is a hit among kids. You can also come up with funny word problems that kids will like.